It’s National Farmers Market Week August 5 -11 and tribes and tribal producers are no strangers to the farm-to-table movement with tribal farmers markets established throughout Indian Country.

On the White Mountain Apache Reservation in the high mountain desert of eastern Arizona, Ndée Bikíyaa, which translates to the Peoples’ Farm in Apache, sells onions, garlic and other select tribally-grown produce at a farmers market they set up at the local grocery store parking lot the first and third Fridays of the month. 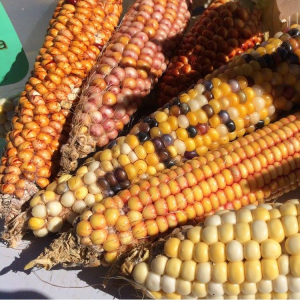 “We sell in the parking lot hoping to catch people with our local, high-quality fruits and vegetables before they go into the grocery store,” said Clayton Harvey, farm manager and tribal member. “We are really committed to serving our community.”

Though the farm has been hit a bit by the drought this year, like many producers across the country, Harvey says he’s looking forward to offering a larger variety of produce at the Apache Harvest Festival hosted by the farm on August 31.

The festival, now in its sixth year, features traditional Apache foods and new twists on preparation, such as acorn stew and corn mush made with frozen berries and agave syrup to sweeten the drink and add flavor instead of using deer or cow lining.

The Ndée Bikíyaa Farmer’s Market is located in the Basha’s parking lot in Whiteriver, Arizona, and runs from 10 a.m. to about 1 p.m. from June to mid-September or October, depending on the first frost.

More information also can be seen on the farm’s Facebook page at www.facebook.com/ndeebikiyaathepeoplesfarm.

Oneida Farmer’s Market in Wisconsin
The Oneida Nation of Wisconsin’s market, located about 6 miles west of Green Bay, starts June 21 and is open every Thursday until October 4.
https://oneida-nsn.gov/resources/oneida-community-integrated-food-systems/farmers-market

Choctaw Fresh Produce in Mississippi
The Mississippi Band of Choctaw Indians operates the Choctaw Farmers’ Market off Highway 16 West in the Pearl River Community from June through October.
www.choctaw.org/government/tribalServices/health/wic/farmersMarket.html
www.facebook.com/choctawfreshproduce

NativeAmerica.travel, the first and only destination website dedicated to authentic, Native American tourism experiences, invites visitors from across the globe to experience, understand and absorb America’s first cultures. The site presents a 360-degree view of Native American tribes and Native peoples throughout the United States who are telling their own stories in their own voices. The website is operated by the American Indian Alaska Native Tourism Association (AIANTA), a 501(c)(3) national nonprofit association incorporated in 2002 to advance Indian Country tourism.