In partnership with the National Park Service, the American Indian Alaska Native Tourism Association will work with Tribes to develop cultural heritage content and itineraries for the websites LewisAndClark.travel and NativeAmerica.travel.

ALBUQUERQUE, New Mexico (January 21, 2020) – The American Indian Alaska Native Tourism Association (AIANTA) has partnered with the National Park Service (NPS) to find and share the stories of Native American Tribes that intersect with the Lewis and Clark National Historic Trail. 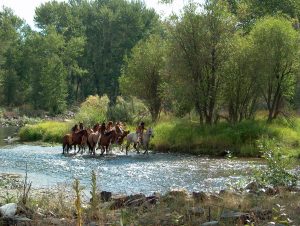 Over a three-year period AIANTA will conduct interviews with and make site visits to Tribes in Washington, Oregon, Idaho, Montana, North Dakota, South Dakota, Nebraska and Kansas, to develop content and create regional itineraries that include Native and Tribally owned destinations and experiences along the route. Completed content will be showcased at LewisAndClark.travel and NativeAmerica.travel.

“We are excited to work with the National Park Service to help Tribes along the Lewis and Clark National Historic Trail share their stories,” said Sherry L. Rupert, Executive Director of AIANTA. “Native Americans are often left out of the historical narrative, so we are thrilled that NPS is looking to deliver a comprehensive inventory of tribal activities and cultural tourism experiences for visitors interested in traveling all or parts of the famed route.”

More than 215 years after Lewis and Clark and their Corps of Discovery commenced their two-year journey, this program expands on the groundwork, contributions and learnings from the Circle of Tribal Advisors of the Lewis and Clark Bicentennial Commemoration (2003-2006) and offers new opportunities for Tribes to share their stories to visitors from around the globe through cultural tourism.

The Lewis & Clark Expedition commenced in 1803, after the completion of the Louisiana Purchase, to help the U.S. Government map the uncharted west. Led by Meriwether Lewis and William Clark, the expedition lasted two years and encompassed nearly 8,000 miles, round trip. Along the way, the expedition team met nearly 50 Native American tribes, who were integral in helping the expedition chart the unknown territory.

About the Lewis and Clark National Historic Trail

For nearly two decades, the American Indian Alaska Native Tourism Association (AIANTA) has served as the national voice for American Indian nations engaged in cultural tourism. In addition, AIANTA provides technical assistance, training and capacity building to Tribal nations and Native-owned enterprises engaged in tourism, hospitality and recreation. AIANTA is supported by a combination of public and private funding, as well as a robust membership program.

To learn more about AIANTA or to join us in helping elevate economies through cultural tourism, please call 505.724.3592, email info@aianta.org and/or visit www.aianta.org or www.nativeamerica.travel.