Director’s Corner: The Power of Storytelling 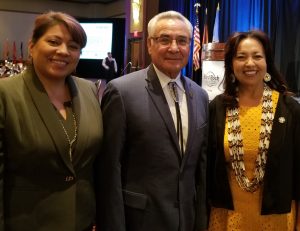 It’s hard to believe I took over the helm of AIANTA just four months ago.

It has been an incredibly exciting and busy time, which included traveling to Anaheim for the IPW travel trade show, meeting with our partners in Washington D.C. and joining Brand USA for their inaugural Travel Week in London.

In the midst of it all, the team at AIANTA also hosted our 21st Annual American Indian Tourism Conference (AITC), in Tulsa, Oklahoma.

I could not be more pleased as to how the conference went, and am especially grateful to our gracious hosts, the Cherokee Nation. They certainly exceeded our expectations.

While the conference did not have a formal theme, it quickly became obvious that this year’s focus was the “power of storytelling.”

I am so proud to work in an industry with so many dedicated, passionate people who are all working toward a common goal–to create economic successes for Indian Country through tourism, while sustainably perpetuating cultural heritage.

I think Cherokee Nation Principal Chief Bill Hoskin, Jr. said it best in his keynote speech during the AITC opening session, when he said, “You cannot measure that which is immeasurable–Indian People telling their own story.”

While Chief Hoskin may have said it first, it was a sentiment that presented itself over and over throughout the conference.

We had so many wonderful speakers, teachers and friends joining us for the three-day conference, and I’d like to thank you all for joining the conversation.

I’d especially like to thank Roger Dow, President & CEO of the U.S. Travel Association; Keith Henry, President & CEO of the Indigenous Tourism Association of Canada; Jefferson Keel, President of the National Congress of American Indians and Lt. Governor of the Chickasaw Nation; Jeff Grubbe, Chairman of the Agua Caliente Band of Cahuilla Indians; and Nick Mattera, Senior Director of Consumer Marketing for Brand USA, who all took the time to share of themselves and their knowledge with our attendees.

For me, a personal favorite was the ability to meet and interview John Herrington (Chickasaw), the first Native American in outer space, and TV personality Ariel Tweto.

Imagine,  these two Native Americans will star in the upcoming Brand USA Imax film, Into America’s Wild (working title), and are effectively the inbound tourism ambassadors for the United States for the coming year!

Mostly, however, I’d like to thank all of you, the hardworking people of Indian Country, who do what you do every day, often with too little pay and not enough appreciation, to help keep your cultures alive and make sure it continues to be presented in an authentic voice.

It is you who are the stars of the tourism industry and we at AIANTA salute all that you do.

If you weren’t able to make it to Tulsa this year, please mark your calendars for Sept. 14-17, 2020, when we will hold our 22nd Annual American Indian Tourism Conference in Ft. McDowell, Arizona.

Until then, drop me a line and let us know what tourism projects you’re working on.