Pre-Columbian Sites in the US

20 Pre-Columbian Sites in the US

When Christopher Columbus set sail in 1492, he was lured by the promise of gold, spices and other riches available in “Asia.” Instead he “discovered” a new world. For many, this expedition also marks the beginning of history in the United States.

The first indigenous people to inhabit this land, however, have been here since time immemorial. History buffs interested in exploring ancient cultures and indigenous historic sites in the U.S. can find inspiration below. #DiscoverNativeAmerica

In scientific circles, it is generally accepted that the Clovis people–those believed to have crossed into North America by walking over the Bering Land Bridge–were the first to settle here, some 13,000 years ago.

Increasingly, however, evidence points to earlier civilizations. One may have migrated here some 16,000 years ago and another archaeological find suggests that the first people colonized Alaska 25,000 years ago.

When Albert Miller found a prehistoric tool on his family farm in 1955, he had no idea that his discovery would eventually yield nearly two million ancient artifacts dating back 16,000 years. A rock ledge overhang in the area even shows evidence of campers dating back 19,000 years. The Meadowcroft Rockshelter, believed to be the oldest human settlement in the U.S., was designated a National Historic Landmark in 2005. heinzhistorycenter.org

Further credence supporting a pre-Clovis civilization was unveiled in 2019, when scientists discovered 189 artifacts, in what they are calling “the earliest radiocarbondated evidence of people interacting with extinct animals in North America” at the Cooper’s Ferry archaeological site in western Idaho. Although the dig site is off limits to visitors, it is well known to Idaho’s Nez Perce Tribe, who called the ancient village site, Nipéhe. sciencemag.org

Remains of the Clovis culture can be found at the Blackwater Draw National Landmark in New Mexico. Thanks to a spring-fed Pleistocene Lake, the site was an important location for gatherings and cultural activities. Today, the 640-acre park features a variety of excellently preserved artifacts, including thousands of tools, and evidence of many extinct species of fauna. enmu.edu

Near the eastern boundary of Kobuk Valley National Park sits Onion Portage, an ancient site visited by numerous Arctic civilizations. Excavations of the area indicate the presence of a minimum of nine different cultures dating back at least 8,000 years. The site has housed both coastal people who hunted whales and seals as well as nomadic people who generally lived in Alaska’s interior. Some were early ancestors of the Inupiat, who still live in the Kobuk River Valley. nps.gov/kova

Designated a World Heritage Site in 2014, Poverty Point features massive earthworks, including five mounds and six rows of semielliptical concentric ridges. Built by hand, these mounds reach as high as 72 feet. The site also features millions of artifacts including domestic tools, human figurines and tons of stones carried from up to 800 miles away. The site is believed to have been home to hundreds or even thousands of people. povertypoint.us

The Blythe Intaglios were constructed by scraping away a top layer of soil to reveal massive “drawings” in the lighter soil below. With the largest figure stretching more than 170 feet, the intaglios are best viewed from the air. It is believed the intaglios were created by the Mohave and Quechan people, both native to the lower Colorado River area, to represent Mastamho, the Creator of all Life. blm.gov

More than one thousand petroglyphs can be found on one boulder at this soapstone quarry in Jackson County, North Carolina. Although the site is believed to pre-date Cherokee presence in the region, it is sacred to the Tribe, which believes the markings were made by Judaculla, a powerful being also known as the “Great Lord of the Hunt.” Never excavated, it is believed the site contains numerous other treasures below the surface. nps.gov/nr/feature/places/13000116.htm

Giant earthen mounds in the Ohio River Valley, said to have been built nearly 2,000 years ago by the Hopewell People, are belinps.gov/hocueved to be gathering sites for feasts, funerals and rites of passage. These earthworks are among the largest in the world of those not used as fortifications or defensive structures. At Hopewell Culture National Historic Park, visitors can see six sites of Hopewell buildings, including some with walls up to 12 feet high. nps.gov/hocu

Excavation for a condo development in 1998 led to the discovery of the Miami Circle, a perfect circle measuring 38 feet with 24 holes cut into the limestone bedrock. Dating back nearly 2,000 years, it significantly predates other permanent settlements on the East Coast and is believed to have been the home or capital of the Tequesta Indians. info.flheritage.com/miami-circle

The Ancestral Puebloan (also Anasazi) Culture lived throughout the Southwest until about 1300 A.D. In Colorado, Mesa Verde is a well-preserved prehistoric settlement of the Ancestral Puebloan culture. The plateau sits at an altitude of more than 8,000 feet  and is home to thousands of archaeological sites, including some 600 cliff dwellings built from sandstone and mud mortar. www.nps.gov/meve

Northeast of St. Louis, visitors can find the remains of one of the greatest cities in the world. Said to be larger than London in 1250 A.D., the pre-Columbian city is believed to have had a population of 20,000 at its peak. The largest archeological site north of Mexico City, Cahokia is home to more than 120 mounds. cahokiamounds.org

Chaco Canyon, known for its monumental public and ceremonial buildings was a major center of Ancestral Puebloan Culture between 850 and 1250 A.D. It is particularly well known for its ancient urban ceremonial center, which is unlike any other site ever constructed. nps.gov/chcu

The largest surviving serpent effigy in the world, the massive Serpent Mound stretches nearly 1,350 feet and is considered to be among the largest geoglyphs in the world. According to UNESCO, the site “aligns astronomically to mark the passage of the seasons.” whc.unesco.org/en/tentativelists/5248

The Moundville site, occupied from around A.D. 1000 until A.D. 1450, is a large settlement of Mississippian culture on the Black Warrior River in central Alabama. Within the enclosure, surrounding a central plaza, were twenty-six earthen mounds, the larger ones apparently supporting noble’s residences alternating with small ones that supported buildings used for mortuary and other purposes.

The Pueblo of Acoma, the oldest inhabited community in the U.S., is also home to the second-oldest building in the U.S. While most people no longer live in the ancient pueblo full time, they do return for special cultural occasions. Here, see the Acoma potters who carry on the age-old tradition of making thin-walled Pueblo Indian pottery which is widely acclaimed for its beauty and quality craftsmanship. puebloofacoma.org

The Moundville site, a large settlement of Mississippian Culture, located on the Black Warrior River in central Alabama, is believed to be second only to Cahokia Mounds in terms of complexity. It was once a busy town as well as a political and religious center. Surrounding a central plaza there are 26 earthen mounds alternating with smaller ones throughout the area. moundville.museums.ua.edu

The only living Native American community that has been designated a World Heritage Site and a National Historic Landmark, Taos Pueblo has been continuously inhabited for more than 1,000 years. The Pueblo is constructed entirely of adobe—earth mixed with water and straw–and two structures, Hlauuma (north house) and Hlaukwima (south house), are considered to be the oldest buildings in the USA. taospueblo.com

The 15-foot tall Nikwasi Mound is the only remaining site of what was once a 100-acre Cherokee village. The mound, according to historians, was a meeting place and a sacred site. Nikwasi, which means “center of activity” in Cherokee, was active until 1819, until Cherokee lands were overtaken. ncmarkers.com

Etowah Mounds, also known as Etowah Indian Mounds is a National Historic Landmark enclosing the ruins of a prehistoric Native American city whose original name is unknown. The destination of the mounds lies now on Muscogee-Creek Native American land. The site has three large mounds; the chief’s residence (Mound A), the ceremonial site for religious rituals (Mound B), and the burial site for the nobility (Mound C) and three smaller mounds. Between the mounds lies a plaza which served for ceremonies, commerce and as a ball field.

One of the largest prehistoric structures ever built in North America, Casa Grande dates back to the ancestral Sonoran Desert People. Although it was believed to be used for farming and as a trade center, there are no written records about the site’s purpose. nps.gov/cagr

A sacred complex, the Medicine Wheel/Medicine Mountain National Historic Landmark was used by numerous tribes, from before Euro American contact and well into to the present day. Artifacts here suggest it was in use up to 7,000 years ago. The site is home to one of the largest stone medicine wheels in North America. fs.usda.gov/detail/bighorn/

At Kahanu Gardens, the Pi’ilanihale Heiau, believed to have been built during the 14th century, is the largest single heiau (place of worship) in all of Polynesia. The building traces its origins to a time when Polynesian voyagers settled in the Hawaiian islands and gradually transformed into farmers. It is believed to have been a residence or key gathering place for the ruler and high chiefs of the time. ntbg.org/gardens/kahanu 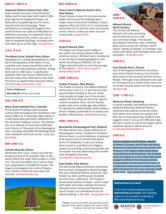 Click on the image to download a PDF version of our 20 Pre-Columbian Sites in the US guide .

To be included on this page, please email info@aianta.org for more information.