Ferguson, along with Deb Hickok, president and CEO of Explore Fairbanks, are the first Alaskans to serve on the U.S. Travel Board.

Albuquerque, New Mexico (February 22, 2019) – Camille Ferguson, the executive director of the American Indian Alaska Native Tourism Association (AIANTA) has been elected to the U.S. Travel Association’s Board of Directors as an At-Large Director, the association announced on Thursday.

Ferguson, a citizen of the Sitka Tribe of Alaska and a member of the Kiksadi Clan, has been executive director of the American Indian Alaska Native Tourism Association (AIANTA) for six years. Only the second-ever Native American to serve on the U.S. Travel board, her three-year period will run through 2021. During her term, she plans to augment her work with elected officials in advocating for the importance of including tribal tourism in the national tourism message.

“Tourism to Native American communities supports economic and social stability, especially in remote and rural communities, which in turn contributes to the overall health of the U.S. economy,” said Ferguson, who introduced AIANTA’s “Our Voices, Our Stories” campaign, which emphasizes the importance of tribal entities taking control of their own tourism messaging to provide greater authenticity and sustainability in a rapidly growing inventory of cultural tourism offerings. Under her leadership, AIANTA receive national recognition when it was presented the President’s “E” Award for Exports of tribal tourism. 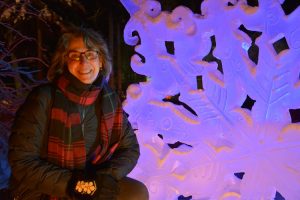 Joining Ferguson as a first-time, at-large director is Deb Hickok, president and CEO of Explore Fairbanks. A destination marketing and management professional for nearly 37 years, Hickok became CEO of Explore Fairbanks in 1999. Under her guidance, Explore Fairbanks has received numerous awards, including the Governor of Alaska’s Exporter of the Year Award and the Destiny Award from the U.S. Travel Destinations Council. She currently serves on two other boards of directors, the Alaska Travel Industry Association (ATIA) which she chaired in 2011 and the Greater Fairbanks Chamber of Commerce.

Ferguson also joins another Ferguson, Elliot L. Ferguson, II, president and CEO of Destination DC, who was elected as the new national chairman of the board.

“I look forward to working with Elliott,” said AIANTA’s executive director. “He has a deservedly well-respected reputation for driving awareness of the cultural offerings of a city more commonly known for its political inner-workings. I believe his leadership will further help drive attention to the importance of including Native American, Native Alaskan and Native Hawaiian stories and issues in the national tourism agenda.”

About Explore Fairbanks
Explore Fairbanks is a non-profit marketing and management organization whose mission is to be an economic driver in the Fairbanks region by marketing to potential visitors and optimizing the visitor experience. Explore Fairbanks markets Fairbanks as a year-round destination by promoting local events, attractions and activities to independent travelers, group tour operators, travel agents, meeting planners and the media as well as by developing public policy and infrastructure to achieve marketing objectives. explorefairbanks.com

About the U.S. Travel Association
U.S. Travel Association is the national, non-profit organization representing all components of the travel industry that generates $2.4 trillion in economic output and supports 15.6 million jobs. U.S. Travel’s mission is to increase travel to and within the United States. Visit www.ustravel.org.