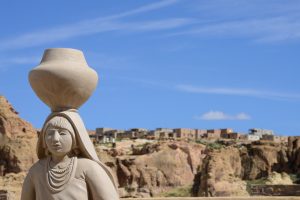 When attendees gather for the nation’s only conference on tribal tourism, they will also have the opportunity to explore some of the Southwest’s most notable tribal tourism destinations.

Three Mobile Workshops, offered the morning of September 17 before the American Indian Alaska Native Tourism Association’s (AIANTA) 20th annual American Indian Tourism Conference at the Isleta Resort & Casino, will bring participants to Acoma Pueblo and Puye Cliffs in New Mexico and to the capital of the Navajo Nation in Window Rock, Arizona.

This cultural heritage experience combines Puye Cliff Dwellings above the Pueblo of Santa Clara in Northern New Mexico with a visit to the Poeh Cultural Center, both of which have previously earned AIANTA’s Best Cultural Heritage Experience Award.

The workshop, led by Tina Whitegeese (a member of the Santa Clara Pueblo and an AIANTA Excellence in Customer Service Award recipient,) will discover the awe-inspiring ancestral home of Kha’p’o Owinge (Santa Clara Pueblo). Visitors will explore early Pueblo architecture, including the area’s cliff and cave dwellings. They will also have a chance to visit the only Harvey House by entrepreneur Fred Harvey—who created a slew of restaurants and hotels in the late 1800s—ever built on an Indian reservation. Members of the Santa Clara Pueblo will also perform traditional dances for AITC delegates.

Participants will also visit the Poeh Cultural Center at the Pueblo of Pojoaque, which is revitalizing its cultural traditions with the assistance of the Poeh. Through the Poeh Arts Program, the museum provides art education to all Native Americans—especially Tewa, Tiwa and other Pueblo Indians—and art demonstrations will be available during the tour.

Photography is allowed at Puye and the Poeh Center but video recordings are not allowed.

Rich in cultural and architecture, the Center and Museum, which earned AIANTA’s Tribal Destination of the Year Award in 2015-2016, serve as the gateway to Acoma’s “Sky City.” Still occupied year round without water or electricity, Sky City is built atop a sheer-walled, 367-foot sandstone bluff in a valley studded with sacred, towering monoliths.

The program concludes with a visit to Albuquerque’s notable Indian Pueblo Cultural Center, the gateway to the region’s 19 Pueblos. Designated AIANTA’s Tribal Destination of the Year (2013-2014,) the Cultural Center tells the Pueblo story in the words and voices of Pueblo people.

Don’t miss the “We Are of This Place: The Pueblo Story” exhibit, which shares the Pueblo people’s traditions that have been passed down for generations. Also check out artist and humorist Ricardo Cate of Kewa, (who will also participate in AITC’s Native Art Show) in the Cultural Center’s featured artist gallery through January 2019.

Photography: Camera permits are included in the tour fee, however, no photography is allowed inside the church or within the cemetery courtyard.

Dress Code: Dress comfortably, however out of respect for their religious leaders who reside on the mesa year round, please no revealing clothing. If staff or Pueblo representatives feel your clothing is inappropriate, you will be asked to cover up. Limited pieces of clothing are available to borrow during the visit.

Take a tour of the capital city of the Navajo Nation in Window Rock, Arizona, where the Navajo Nation Museum has extensive holdings of art, ethnographic, archaeological and archival materials. Their collection includes more than 40,000 photographs as well as a wide variety of documents, recordings, motion picture film and videos, and the museum is a popular location with authors, researchers and publishers due to its extensive archive of historical photographs.

After the museum, delegates will spend time with a medicine man and visit a hogan, the primary, traditional dwelling of the Navajo people. The next stop: the Navajo Nation Zoo and Botanical Park is the only Native American owned-and-operated zoo in the United States. Attracting more than 40,000 visitors every year, the Navajo Zoo is home to more than 50 animal species native to the Navajo Nation.

Lastly, visit the Veteran’s Memorial Park dedicated to the Navajo Code Talkers of WWII. If you love Native American history then the men who fought for the USA will inspire you. The victory in the Pacific arena of that war was attributed to the Navajo Code Talkers providing secure communications for the U.S. military. Since the Navajo language is not a written language, the Japanese could not study the words nor interpret the communications during the war. Meet and greet a Veteran and President Russell Begay and Vice President Jonathan Nez of the Navajo Nation.

Click here to register for any of the American Indian Tourism Conference Mobile Workshops.

For more than two decades, the American Indian Alaska Native Tourism Association (AIANTA) has served as the national center for providing tourism and recreational travel technical assistance, training and capacity building to American Indian nations. AIANTA is a 501(c)(3) national nonprofit association of Native American tribes and tribal businesses and was incorporated in 2002 to advance Indian Country tourism. AIANTA’s mission is to define, introduce, grow and sustain American Indian and Alaska Native tourism that honors traditions and values.